“I am committed to continuing to serve as a fair and impartial justice, who strictly applies the text of the Constitution and our laws as written.”

“I am committed to continuing to serve as a fair and impartial justice, who strictly applies the text of the Constitution and our laws as written.”

Justice Kevin Jewell was first elected to the Fourteenth Court of Appeals on November 8, 2016, winning the support of nearly one million voters.

Prior to his service on the Fourteenth Court of Appeals, Justice Jewell was a litigation and appellate shareholder at a top Houston firm, where he chaired the firm’s appellate practice group. Before taking the bench and after 23 years in private practice, Justice Jewell handled hundreds of appeals and presented oral arguments in more than 100 cases collectively in the Supreme Court of Texas, all intermediate appellate courts in Texas, and several United States courts of appeals.

Throughout his career, Justice Jewell has been recognized for his outstanding abilities, including recognition as a Texas Super Lawyer by Super Lawyers Magazine for more than a decade. Justice Jewell has been Board Certified in Civil Appellate Law by the Texas Board of Legal Specialization since 1998, he is a member of the State Bar of Texas and Houston Bar Association, and a Life Fellow of the Texas Bar Foundation. Justice Jewell is a former adjunct professor at the University of Houston Law Center. 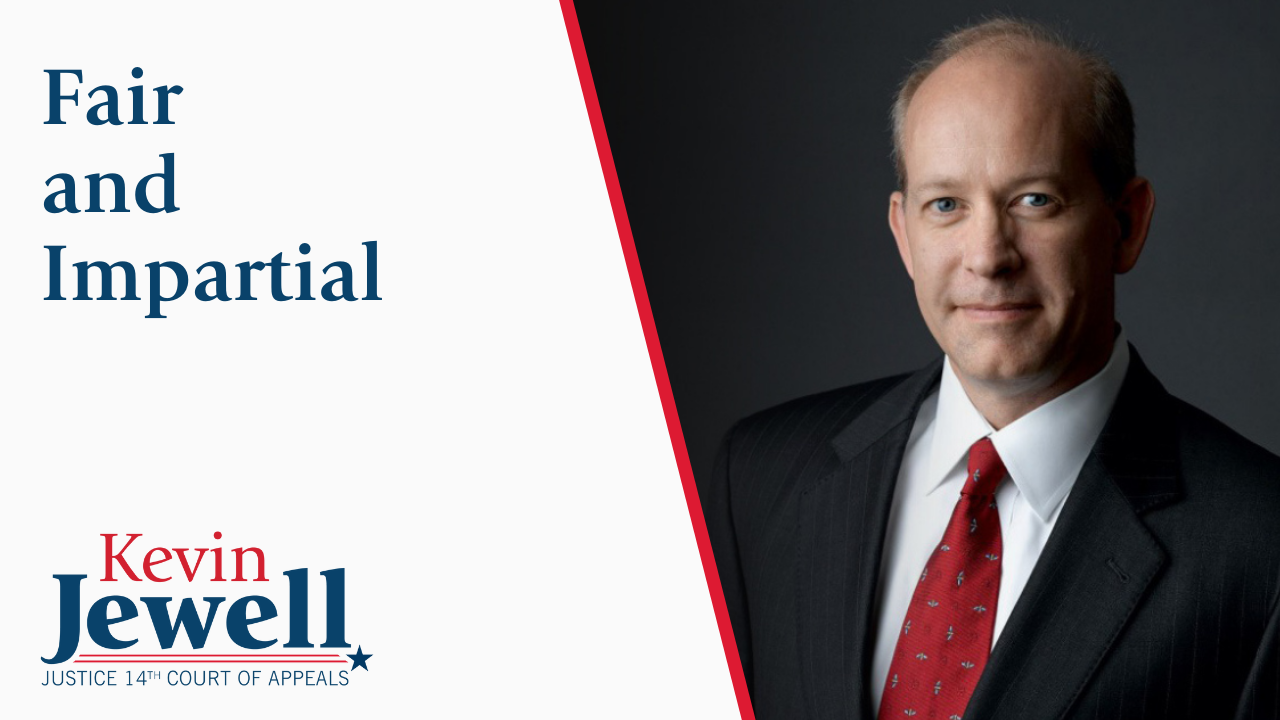 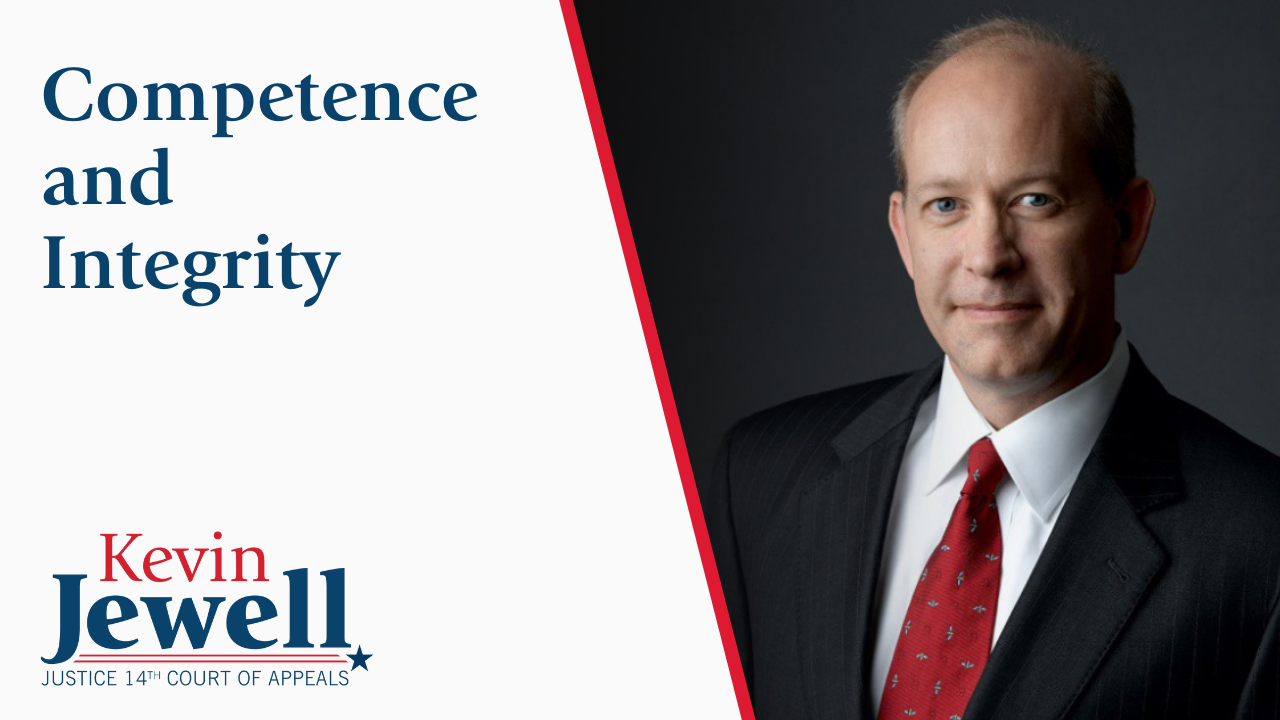 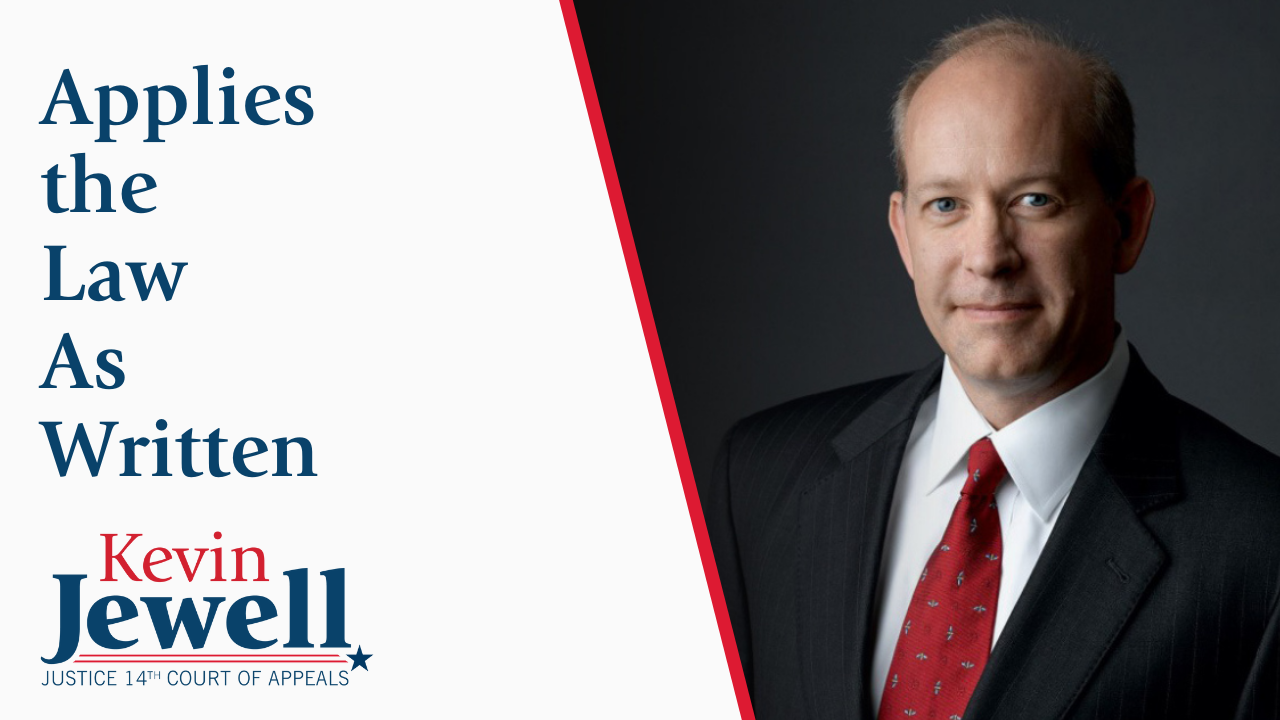 I am proud to serve you on the Fourteenth Court of Appeals as a fair and impartial Judge who upholds the rule of law in our state and will never legislate from my seat on the bench.

You elected me to apply the law as written and to never privilege one party over another due to personal preference. I have upheld my oath to you and am proud to serve every Texan who depends on the equal application of the law.

I believe a judge’s core job is to deliver justice for all and give all parties the fair day in court they deserve. Regardless of personal beliefs or any partisan affiliation, I will always do my part to ensure justice is served in Texas and that our courts never become yet another political arena.

At a time when so many worry that our judicial system is filled with politicians in robes, I am proud to be a Justice who applies the law equally and fairly, with competence and integrity. Without the rule of law, we risk losing many of the things that make Texas and America so remarkable. You can count on me to defend the rule of law and to treat everyone who comes before the Fourteenth Court of Appeals with fairness and dignity.

Thank you for supporting my campaign and helping ensure Texans will continue to have fair and impartial justices on the Fourteenth Court. Supporters like you make this campaign “go” and help me deliver justice for our community and our state.

To make a secure contribution, please click the Donate button just below or this link. If you prefer to donate by check, please mail gifts to P.O. Box 684281,
Austin, TX 78768.

Thank you for being part of my team!

For a downloadable high-resolution image, click here, here, or here.

Pol. ad paid for by Kevin Jewell Campaign, Charles Jeremiah, Treasurer, in compliance with the voluntary limits of the Judicial Campaign Fairness Act.